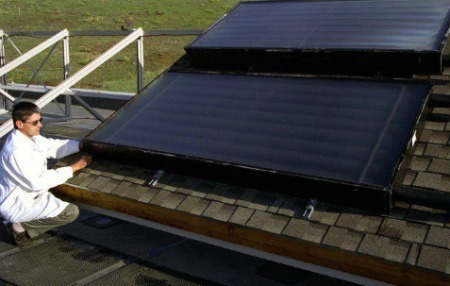 Doug Powell, a technician with the National Renewable
Energy Laboratory, checks the piping on an experiment
designed to test natural convection loops to protect pipes
from freezing in a solar water heating application. The system
pictured is an integral collector storage system. The natural
convection loops would work for any system where potable
water is exposed to ambient air.
Photo by Warren Gretz/NREL 06439.

As oil-producing nation's jockey for market share with on-again, off-again agreements to cap production, experts say the only clear thing could be uncertainty.

That uncertainty begins with crude oil prices, which some expected a month ago to rise to levels high enough to reignite and sustain domestic production. If an agreement to cap production is reached, costs would go up for consumers; if there is no agreement Oklahoma's economy could extend its 19-month contraction stemming from the slump in oil and gas industry.

With the fossil-fuel economy in flux, renewable energy advocates say now might be a good time for homeowners to look at solar options to stabilize — and maybe reduce — household utility costs. For those who make the switch, federal tax credits remain available — with gradual reductions — through 2021 for photovoltaic and solar thermal technologies.

Peter Bauer, a professor at the University of Notre Dame's College of Engineering and its Center for Sustainable Energy, said affordable options exist for those who decide to adapt. Bauer shared those comments with WalletHub, a personal finance website, which recently analyzed a number factors "to determine the most energy-efficient states."

"Use a small solar array around the power level of your home usage during the day — about 400 to 800 watts," Bauer said, offering a couple of tips for building an energy-efficient home on a budget. "This avoids expensive storage capability and over design."

Kenneth Gillingham, an assistant professor of environmental and energy economics at Yale School of Forestry and Environmental Studies, told WalletHub analysts homeowners have a number of options when it comes to financing the cost of solar panels. In addition to outright purchases or traditional consumer financing, Gillingham said there are companies doing business in some states that install solar panels, to which they retain ownership, and sell solar-generated electricity to the homeowner at a negotiated rate that is lower than those charged by utility companies.

"Not all of these options are available from every installer or in every location, but it is worth exploring these options," Gillingham said. "Solar ownership allows the consumer to reap all the benefits from the panel, but the payback period may not always be short."

Gillingham said solar power purchase agreements "are attractive in that the upfront cost is either very low or zero and the installer is responsible for maintenance." He said the benefits to the homeowners, however, are not as great.