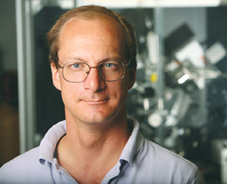 In the purest sense recycling is taking what has once been used and changing it, treating it, processing it so that it can be re-used. Paper, aluminum cans, plastics ... all of these can be found in recycling bins across the country. Led by Peter C. Burns, the Director for the Center for Sustainable Energy at the University, Director of the Notre Dame Energy Frontier Research Center — Materials Science of Actinides, and Massman Professor of Civil & Environmental Engineering & Earth Sciences, researchers at Notre Dame have been developing a way to “recycle” spent nuclear fuel without creating additional radioactive waste. This is key since the traditional method of processing uranium fuel uses organic solvents that become radioactive; it is costly and poses a threat to the environment. The Notre Dame team has created a solvent-free approach that uses water and ultrafiltration to separate species of uranyl peroxide clusters from nuclear waste, an approach that recovers 85% of the uranium in aqueous solutions safely and economically.

Although the Latin phrase primum non nocere [first do no harm] is typically used as a precept of healthcare and bioethics, it could as easily be used when it comes to environmental issues. Nuclear energy has long been a focus of many researchers and remains so in spite of anti-nuclear protests that have been waged since the 1970s. Because of the potential problems with nuclear waste, nuclear power has not been pursued as actively as other options. However, nuclear power plants produce no emissions. They are essentially carbon free and produce more electricity than other renewable alternatives, like solar or wind. Thus, since nuclear power requires the use of uranium, the issue with this type of energy lies not in the generation of the power but in the disposal and storage of the radioactive waste resulting from the generation of that power. Nuclear waste is not biodegradable and can remain radioactive for thousands of years. If there is an accident or if it is not properly stored, it can leach into the environment. Many researchers, like those on the Notre Dame team, believe one solution to effective, efficient, and safe nuclear power lies in the reprocessing of spent nuclear fuel. In 2005 Burns and his research group published the first information on a family of novel uranyl peroxide hydroxide spherical nanoclusters — actinides — that they have continued to explore. Most recently, funded by the Office of Basic Energy Sciences of the U.S. Department of Energy, they have demonstrated that these species can be separated from aqueous solutions, such as those created dissolving spent fuel from nuclear power plants. 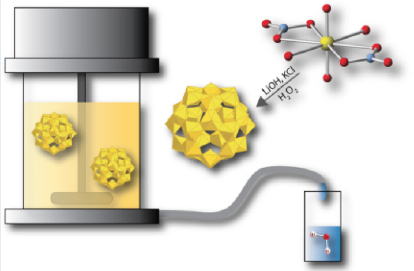 What the team has found is that uranyl peroxide nanocluster species are composed of collections of four-, five-, or six-membered rings of uranium polyhedra. These spherical cage clusters feature diameters up to four nanometers. The cluster properties of the species suggest that they could then be removed from solutions using a variety of separation processes, selective-size ultrafiltration. Using a series of three commercial ultrafiltration membranes, the team successfully separated the uranium species from the waste stream for purification and to concentrate and collect the purified uranium product for further processing.

After encouraging the development of uranyl peroxide clusters in untreated samples, the waste solution is then sieved through a series of membranes (ultrafiltration) so that the clusters can be separated from the solution. Chemical and spectroscopic analyses confirm the efficiency of the filtration process. This is also visible in the noticeable color change of the solution.

The results of their work suggest that the assembly of the cluster species they encouraged accounts for nearly all of the uranium in the test solution, with no evidence of uranium species being absorbed by the membranes used as filters. Furthermore, their work implies that it may be possible to design an ultrafiltration to recover the uranium from the solution by exploiting the difference in size between the uranyl peroxide clusters and other solutes in a solution. It also begins to identify the characteristics necessary for more specific membranes, rather than the three commercially available membranes with different pore sizes used in this study. As the team continues to work, the data will assist in the design and synthesis of new membrane materials designed specifically for safe and effective processing of nuclear waste.