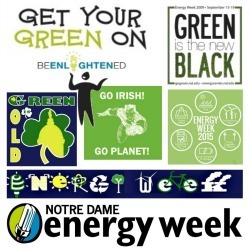 Remembering back to October 2007 and the first-ever Notre Dame Energy Week triggers thoughtful reflection of the many events that were held over the last decade to raise awareness of major energy issues. These events provided meaning and purpose to the array of actions that subsequently followed. These actions give us reason today to pause and celebrate the 10th anniversary of Notre Dame Energy Week and the collaborative work that still thrives, all with the common purpose to preserve one of God’s greatest gifts, the Earth.

Notre Dame Energy Week was initiated by the inaugural 14-member Student Advisory Board of the Notre Dame Energy Center. This ambitious group of students kicked off the university-wide event on Oct. 7, 2007. Their enthusiasm was infectious as they displayed store-bought and hand-crafted energy demonstrations on the sidewalks of Notre Dame’s campus. Hoping to draw the attention of other students and create an environment of raising awareness, student volunteers and Prof. Joan F. Brennecke, founding director of the center and advisor to the newly formed student board, stood outside DeBartolo Hall and distributed schedules and small, yet meaningful energy-focused trinkets to help students remember to take part in the week-long activities. The atmosphere was energizing, the enthusiasm contagious, and the impact so enduring that this has become an annual event on Notre Dame’s campus for the past ten years.

Celebrating the 10th anniversary of Notre Dame Energy Week, ND Energy and its now Student Energy Board have planned events during the week of Oct. 3 that continue the tradition of raising awareness of major energy issues. Selecting the most current and important energy topics for the week, students continue to express their enthusiasm, ambition, and strong conviction and commitment to increasing our knowledge and inspiring us to act.

As we celebrate this milestone event, it seems appropriate to introduce alumnus Felipe Witchger. Felipe’s story with us starts when he was an undergraduate student with the passion and desire to create his own Energy Studies major with the help of Prof. Brennecke while pursuing a major in Economics. But if this were not enough, it was Felipe’s enthusiasm and persistence that persuaded Prof. Brennecke to start the  Student Advisory Board and to charge this group with organizing and executing the first-ever Notre Dame Energy Week. Being one of the first members of the student board, Felipe ambitiously took the reins and solicited his fellow classmates who had the same passion for energy as he did to make up the rest of the board.

Today, Felipe is the co-founder and executive director of Community Purchasing Alliance (CPA), a social-purpose cooperative that is wholly owned by its member community organizations. CPA currently has more than 140 participating religious, education, and community institutions in the greater Washington, D.C./Baltimore metropolitan areas. This is yet another example of Felipe’s ambition and desire to do good for society, which couldn’t be more eloquently stated than the story written by John Nagy (‘00M.A.) for the fall 2008 Notre Dame Magazine entitled A New Climate of Cooperation.

Here is a look back over the years, highlighting major events during each Notre Dame Energy Week from 2007 to 2016:

2007 (October 7-13) – Get Your Green On. This year marked the inaugural event, the creation of the Notre Dame Energy Week logo, and the first-ever resounding theme and call to action. This bold statement donned campus, with banners hanging as high as the top of the Notre Dame Power Plant. The energy and enthusiasm by the Student Advisory Board inspired many to join the movement. As simple as it sounds now, the call for action included turning off lights, replacing incandescent lightbulbs with compact fluorescent lightbulbs, taking shorter showers, and recycling, reusing, and repurposing. Film screenings included “A Crude Awakening: The Oil Crash”, “Kilowatt Ours”, and “An Inconvenient Truth”. It was the first-ever “Lights Out!”, a university-wide plea to everyone to turn off their lights for one hour. It was also the first-ever “Quad Display” with representatives from local and regional energy companies lined up on each side of the sidewalk on the South Quad, telling students about their latest technologies in energy. Also held that week was the annual Notre Dame Environmental Education and Research Conference: Energy and the Environment, drawing faculty from the Colleges of Science and Engineering. At the end of the week, a closing reception was held with General Electric making a formal announcement that they would be donating and installing solar panels and the infrastructure worth $500,000 on top of the upcoming newly constructed Stinson-Remick Hall. 2007 Student Advisory Board

2008 (September 17-24) – Be Enlightened. This was the theme of the 2008 Notre Dame Forum, focusing on energy and sustainability. The year was filled with lectures and events that brought to light the challenges and issues surrounding the ability to provide energy efficient solutions to a growing concern of climate change, global warming, and greenhouse gas emissions. Energy Week followed the Notre Dame Forum and included several events for students including discussions with local energy companies, careers in energy, film screenings, and a “green” prayer service at The Grotto. 2008 Student Advisory Board

2009 (September 13-19) – Green is the New Black. An Energy Week t-shirt design contest for students brought this theme, selected by the Student Advisory Board for its creativity and the way in which it compared the sophistication of wearing black to the latest craze of being green. Students were excited to advertise the new movement on campus, and the events mirrored their enthusiasm. There was a Science and Engineering lecture by Notre Dame faculty researchers (Dr. Seth Brown, Dr. Peter C. Burns, and Dr. Prashant Kamat), as well as tours of their research laboratories, and an Economics and Business lecture, featuring Enrique Alejo, Economic and Commercial Counselor of Spain who discussed “Spain: Bringing Renewable Energy to the U.S. and Beyond”. 2009 Student Advisory Board

2010 (September 24-30) – Green is Gold, a catchy phrase created by the Student Advisory Board in honor of The Golden Dome and the inspiration it brings to all of us to do good, vis-à-vis “to be green”. Teaming up with the College of Science, a Saturday morning Energy Expo was held before the Notre Dame home football game that included a presentation on the “Twelve Principles of Green Chemistry” by Dr. John Warner, co-founder of the Warner Babcock Institute for Green Chemistry. Warner discussed how green chemistry is used to reduce or eliminate hazardous substances in the design phase of materials development. Dr. Ty Newell from the University of Illinois at Urbana-Champaign discussed his single-family residence designed to have 100% of its annual energy requirements supplied by solar energy. Later in the week, Notre Dame faculty researchers discussed “The Future of Alternative Energy”, speaking about various renewable energy sources (Dr. Joan F. Brennecke on CO2 capture and geothermal, Dr. Peter C. Burns on nuclear, Dr. Seth Brown on solar, Dr. Thomas Corke on wind, and Dr. Robert Nerenberg on biofuels). 2010 Student Advisory Board

2012 – (September 23-29) – Organizers teamed up with the City of South Bend for an afternoon panel discussion on the past, present, and future of energy in South Bend. Energy Week goers also heard from a panel of Notre Dame faculty experts on the future of energy and a talk and book signing by Maggie Koerth-Baker, science editor at Boing-Boing.net and author of Before the Lights Go Out: Conquering the Energy Crisis Before it Conquers Us. 2012 Student Advisory Board

2014 (October 6-10) – Don’t be left in the dark … educate yourself! This was the mantra that week to encourage individuals to attend events and learn more about current practices in energy, energy-related research at Notre Dame, and careers in energy. A panel discussion about hydraulic fracturing brought leading experts to campus, Dr. Anthony Ingraffea (ND ’69) from Cornell University, Mr. Herschel McDivitt, from Indiana’s DNR’s Division of Oil and Gas, and Dr. Farzad Taheripour from Purdue University. 2014 Student Advisory Board  2014 Energy Week Highlights

2015 (October 4-8) – Along with film screenings, power plant tours, and opportunities to hear from Notre Dame researchers and energy company experts, events included two thought-provoking presentations that generated several questions from the audience and subsequent discussion. Gwyneth Cravens, American novelist and journalist, shared her views on nuclear power as a safe and reliable alternative energy source and one that is an essential preventive of global warming. Cravens is the author of Terrorism and Nuclear Energy: Understanding the Risks and Power to Save the World: The Truth about Nuclear Energy published in 2002 and 2007, respectively. Later in the week, three panelists representing the public and private sectors discussed the future of energy through policy development. Panelists were Robert Schleckser (ND ‘78), Vice President and Treasurer of ExxonMobile, James Mueller (ND ’04), Chief of Staff of the City of South Bend, and Bruce Huber, Associate Professor of Law at Notre Dame. 2015 Student Energy Board  2015 Energy Week Overview

2016 (October 3-7) – A full slate of energy-related events marked the 10th anniversary of Notre Dame Energy Week. Featuring academic lectures and interactive events with the goal of increasing awareness of energy issues, this year's emphasis was on our own campus and many of the initiatives Notre Dame is taking to tackle the energy challenge here and around the world. It also kicked off the Solar Series on solar energy presented by experts in the field, and What’s It Really Like, an initiative connecting undergraduate students with professionals to explore career choices in the energy sector. 2016 Student Energy Board  2016 Energy Week Overview

As you can see, each Energy Week included opportunities for students, faculty, staff, and the general public to get involved in discussions and attend lectures about major issues and global challenges in energy. Many of the topics touched on related issues such as climate change, global warming, and the long-term damaging effects that these and other environmental issues have on our air quality, clean water, land use, plant life, wildlife, and human health and preservation.

So, where are we today? It is more important than ever to continue the discussions surrounding major energy issues and to focus on responding to Pope Francis’ encyclical on the environment, Laudato Si', and the Sustainable Development Goals by the United Nations. Both encompass areas that require the greatest amount of attention globally. Therefore, it is the commitment of ND Energy to continue to bring forth the most important topics in energy for discussion, reflection and relevant action. As long as there remains a need for accessible, affordable, and efficient energy production and use, there too remains a need for ND Energy to be at the forefront of these issues.

ND Energy is a University Research Center whose mission is to build a better world by creating new energy technologies and systems and educating individuals to help solve the most critical energy challenges facing our world today. Under the direction of Dr. Peter C. Burns, Henry Massman Professor of Civil & Environmental Engineering & Earth Sciences and Director of the Materials Science of Actinides Energy Frontier Research Center, there are over seventy faculty from all colleges and schools at Notre Dame who are affiliated with ND Energy and actively support the research and education in energy. ND Energy is located at 115 Stinson-Remick Hall. For more information, visit the ND Energy website at energy.nd.edu or contact Barbara Villarosa, Business and Communications Program Director, at bvillaro@nd.edu or 574-631-4776.