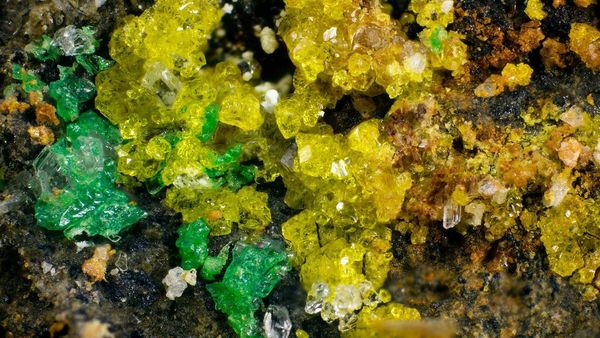 Researchers at the University of Notre Dame found that the complexity of a uranium-based mineral, dubbed ewingite, is nearly twice as high as the previous most complex mineral. The study, published in Geology, required the use of the Advanced Photon Source at the U.S. Department of Energy’s Argonne National Laboratory, the brightest X-ray source in the Western Hemisphere, to define the mineral’s structure.

According to Peter C. Burns, Henry J. Massman Professor of Civil and Environmental Engineering and Earth Sciences, director of the Center for Sustainable Energy at Notre Dame and co-author of the study, structural complexity of minerals can be measured by bits per unit cell. The average is about 228 bits.

“Minerals at 1,000 bits are considered very complex, but only about 2.5 percent of known minerals receive that designation,” said Burns. “In comparison, ewingite measures at 12,684.86 bits per unit cell, essentially doubling the measuring stick that mineralogists currently use.”

Ewingite was found on a damp mine wall in the Czech Republic and was in the same region where uranium ore was mined for Marie Curie’s groundbreaking studies of radioactivity a century ago. Curie’s studies resulted in the discoveries of the elements polonium and radium, which had been in the rocks for a long period of time. Ewingite had likely only grown over decades, after humans began interacting with the mine.

“Humans have done a pretty good job at interfering with the planet’s natural processes by digging into Earth’s surface and releasing chemicals into the atmosphere,” Burns said. “Our next step with this research is to confirm whether or not this extremely complex mineral could have even existed if humans had not opened and exposed the mine to air and water. This is important for understanding what effect human involvement is having on Earth’s other geological processes.”

Burns and his team are working with the Carnegie Institute to gather all existing data on uranium-based minerals to see if they can find variations between minerals that may or may not have been impacted by human existence. Additionally, the Burns lab is attempting to recreate the mineral to better understand the conditions that led to its formation.

Ewingite was named in honor of Rodney C. Ewing, Frank Stanton Professor in Nuclear Security at Stanford University, for his contributions to the fields of mineralogy and nuclear science. The study was funded by the U.S. Department of Energy Basic Energy Sciences program and led by Travis A. Olds as a doctoral student at the University of Notre Dame. Olds is now a postdoctoral scholar at Washington State University.

Contributors to the study include Yu-Sheng Chen of the Center for Advanced Radiation Sources at the University of Chicago; Anthony R. Kampf of the Natural History Museum of Los Angeles County; Jakub Plásil of the Academy of Sciences of the Czech Republic; Luke R. Sadergaski, graduate student of CEEES at the University of Notre Dame; and Antonio Simonetti, associate professor and director of graduate studies in the Department of CEEES at the University of Notre Dame. This research team also utilized the Materials Characterization Facility and Midwest Isotope and Trace Elements Research Analytical Center at Notre Dame to conduct the study.

Originally published by Brandi Klingerman at news.nd.edu on March 07, 2018.