Reutilizing Carbon Dioxide to Produce Clean Burning Fuels
David B. Go has always seen himself as something of a black sheep when it comes to his scientific research approach, and his recent work in developing clean alternative fuels from carbon dioxide is no exception.

In 2015, Go and his research team at the University of Notre Dame were awarded a $50,000 grant to purse innovative electrochemical research in green energy technology through the ECS Toyota Young Investigator Fellowship. With a goal of aiding scientists in advancing alternative energies, the fellowship aims to empower young researchers in creating next-generation vehicles capable of utilizing alternative fuels that can lead to climate change action in transportation.

The Road Less Traveled
While advancing research in electric vehicles and fuel cells tend to be the top research areas in sustainable transportation, Go and his team is opting to go down the road less traveled through a new approach to green chemistry: plasma electrochemistry.

(MORE: Read Go’s Meeting Abstract on this topic, entitled “Electrochemical Reduction of CO2(aq) By Solvated Electrons at a Plasma-Liquid Interface.”)

“Our approach to electrochemistry is completely a-typical,” Go, associate professor at the University of Notre Dame, says. “We use a technique called plasma electrochemistry with the aim of processing carbon dioxide – a pollutant – back into more useful products, such as clean-burning fuels.”

The products Go refers to are alternative fuels. Through Go’s approach to plasma electrochemistry, he and his team are working to reutilize potent greenhouse gases, thereby producing clean burning fuels for vehicles while simultaneously reducing the overall carbon footprint of the transportation sector.

Traditionally, electrolysis requires a solid surface to drive this process, but plasma electrochemistry replaces that traditional method with a gas phase discharge (i.e. plasma). With this, the transfer of electrons into a solution is not mediated by a solid, it’s mediated by a gas.

Think of it as recycling the individual elements that create carbon dioxide to create new products such as methane or methanol. In order to separate the gaseous carbon dioxide to build clean burning fuels out of its elements, Go and his team needed to think outside the box of traditional electrochemical methods that rely on specific electrode materials. Plasma electrochemistry allows the researchers to do just that, opening new opportunities in exploring electrochemical carbon dioxide reforming.

“That’s really the holy grail,” Go says. “Our focus for this research was to see if we could do novel carbon dioxide processing in this way.”

From the Lab to Society
While plasma electrochemistry may be a completely novel approach, it is really a sub-field of plasma-liquid systems, which has become a well-established field, impacting the world in many ways. For example, municipalities in the U.S. and Europe often use plasma systems to clean drinking water.

“Our thought was that the barrier to large scale implementation isn’t that high because it’s already been done,” Go says. “The question is: Instead of just purifying water, what can we do from a chemical processing approach? If we can show that we can make useful chemicals with good efficiency and high selectivity, then it can be a process that can be scaled up to the industrial scale.” 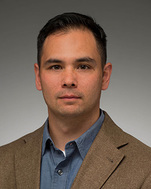 David B. Go, Associate Professor of
Aerospace and Mechanical Engineering

Transformation of Transportation
Go’s research intertwines with an interesting period in time in the transportation sector, where not only are alternative energies and fuels becoming competitive with traditional fossil fuel vehicles for the first time in history, but there is also a push to reduce the carbon footprint of vehicles in order to help combat the effects of climate change.

“I think we’re in a really interesting time right now when it comes to transportation. You can look historically and see we’ve been at the tipping point at various times in history,” Go says. “Certainly in my lifetime, it feels like we’re on the cusp of significant changes in the way we approach vehicular transportation.”

Part of a Significant Change
Go and his team’s research may very well be part of that significant change.
Initially, the team used plasma electrochemistry to make simple chemicals such as formate and oxalate. Once that proved successful, Go accelerated the progress of their work to begin attempts in making chemicals that could be more easily applied to the transportation sector.

“We are moving forward to see if we can be creative and start making some other things that are more interesting or useful to the automotive industry, particularly clean burning fuels such as methanol,” Go says.

According to the EPA, methanol’s high-performance and low emission levels could make it an ideal alternative to gasoline.

Moving the Research Forward
In light of these promising developments, Go hopes to continue this research and explore new, previously unexplored avenues in clean fuels for the automotive industry through plasma electrochemistry.
“We have a ‘the world is our oyster’ kind of attitude,” Go says. “There’s only a few groups taking this approach, so that means that the sky is the limit.”