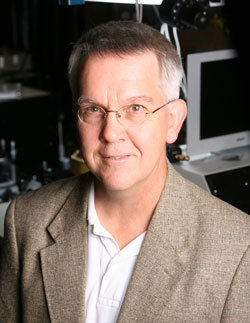 Paul W. Bohn, the Arthur J. Schmitt Professor of Chemical and Biomolecular Engineering, director of the Advanced Diagnostics and Therapeutics initiative and professor of chemistry and biochemistry at the University of Notre Dame, has been named a fellow of the Society for Applied Spectroscopy (SAS). Bohn will be honored for his exceptional contributions to spectroscopy and his service to the society during its annual meeting in October.

A member of the American Chemical Society (ACS) and fellow of the American Association for the Advancement of Science and the Royal Society of Chemistry (RSC), Bohn has received numerous awards throughout his career, including the 2010 Theophilus Redwood Award from the RSC; the 2006 Research Team Award from the U.S. Army Construction Engineering Research Laboratory; the 2005 Bomem-Michelson Award from the Coblentz Society, presented to scientists who have advanced the techniques of vibrational, molecular, Raman or electronic spectroscopy; the 2004 Spectroscopy Society of Pittsburgh Award, which recognizes outstanding contributions in the field of spectroscopy; and the Spectrochemical Analysis Award from the ACS.

Bohn has authored and coauthored more than 210 publications focused on the understanding and control of molecular transport on the nanometer length scale, spatially anisotropic surfaces, optical spectroscopic measurement strategies for surface and interfacial structure-function studies, molecular nanoelectronics and the characterization of optoelectronic materials. He holds six patents issued in technologies related to these efforts. In addition, he has delivered more than 250 invited lectures at universities, national laboratories and industrial laboratories throughout the world. He has also served as a consultant for companies both in the United States and in Europe.

Bohn received his doctorate in chemistry from the University of Wisconsin at Madison. A 1977 graduate of Notre Dame, he has been a member of the faculty since 2006.

The SAS is a nonprofit organization dedicated to the dissemination of information related to spectroscopy and other allied sciences.