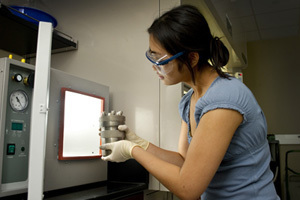 Faculty from the University of Notre Dame’s Colleges of Engineering and Science have been awarded more than $1.3 million from the U.S. Army Tank Automotive Research, Development and Engineering Center (TARDEC) in collaboration with research being conducted by Mississippi State University on the development of novel materials for improved battery technology.

Li-air batteries offer one of the highest theoretical energy densities of any electrochemical power source and more than twice as much as any other existing battery. The goal of this project is to improve battery performance, reliability and safety through the creation of new materials to be used in the batteries that power military vehicles, such as manned and unmanned ground vehicles, directed energy weapons, and hybrid electric vehicles. These technologies are critical for the development of military hybrid vehicles where higher current capability, greater storage capacity, improved durability and reliability are of utmost importance to the safety of the vehicle and its occupants.

TARDEC’s developments in the areas of vehicles, energy storage, batteries and other power show its ability to form partnerships with its industry and academic counterparts, like Notre Dame. These partnerships play an important role in reducing the Army’s logistics burden, keeping soldiers safer and increasing national energy security.

Originally published by Nina Welding at newsinfo.nd.edu on December 06, 2010.