In an effort to heed Pope Francis’ call to be better stewards of our shared Earth and to start implementing the University’s new comprehensive sustainability strategy, Notre Dame has begun planning and installing several geothermal systems across campus. Geothermal systems are sustainable energy systems that allow the University to reduce greenhouse gas production, increase energy security and capitalize on long-term cost savings. Notre Dame’s systems are tailored specifically toward heating and cooling campus buildings by taking advantage of the Earth’s ability to store heat in its crust.

Due to the rising heat from magma below the Earth’s crust, and solar energy absorbed on the surface, the upper layer of the Earth maintains a nearly constant elevated temperature despite fluctuations in outside air temperature.

Geothermal systems take advantage of this renewable source of energy by utilizing a network of water-filled pipes to bring heat from the warm ground during the winter, and deposit excess surface heat in the cooler ground during the summer. 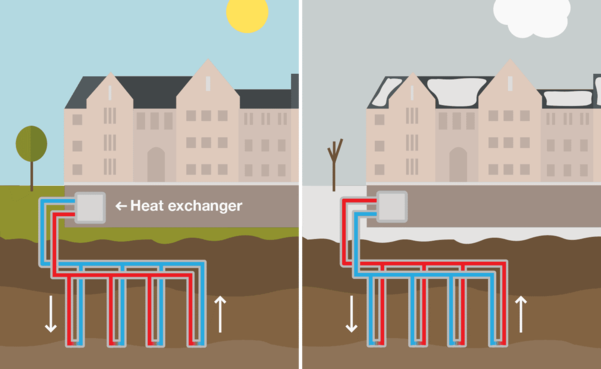 Notre Dame’s systems work by circulating water in a closed-loop piping system to a depth of roughly 300 feet before returning it to the surface and distributing it through an energy center that acts as a heat exchanger. The heat from the Earth warms the water in the pipes to a constant elevated temperature of approximately 50 to 55 degrees Fahrenheit, thereby reducing the amount of energy required to produce the desired hot or cold indoor air temperatures.

The first phase of this project was completed on East Quad this spring. In order to provide more efficient heating and cooling to the Ricci Band Building and Pasquerilla Center, a 300-ton geothermal energy field was installed in the grassy quad south of McCourtney Hall and east of Hesburgh Library. Consisting of 153 wells, the system provides Ricci and Pasquerilla Halls with 150 tons of capacity, leaving 150 additional tons available for future development. 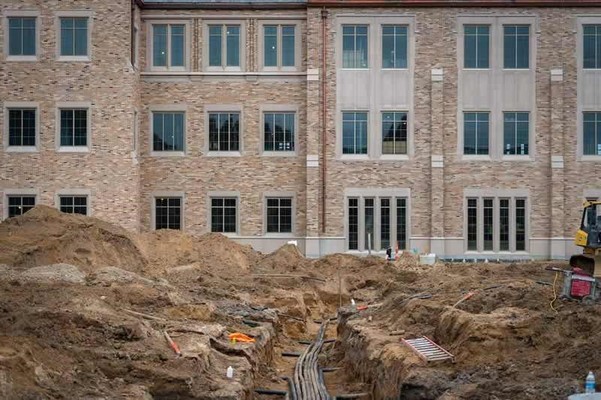 The second phase was implemented over the summer with the installation of a geothermal well field beneath the parking lots south of Notre Dame Stadium. Consisting of approximately 500 wells and 1,000 tons of capacity, this field is considerably larger than the Ricci/Pasquerella field. Unlike the East Quad system which provides heating and cooling exclusively for specific buildings, the south campus system will be tied both to future buildings in the area and to the central campus chilled water system.

“Connecting our geothermal fields to both localized and centralized systems allows the University to maximize its energy efficiency,” said Paul Kempf, senior director of utilities and maintenance. “If more chilled water is produced than the local building needs, the excess can be put into the central system for use elsewhere on campus.” 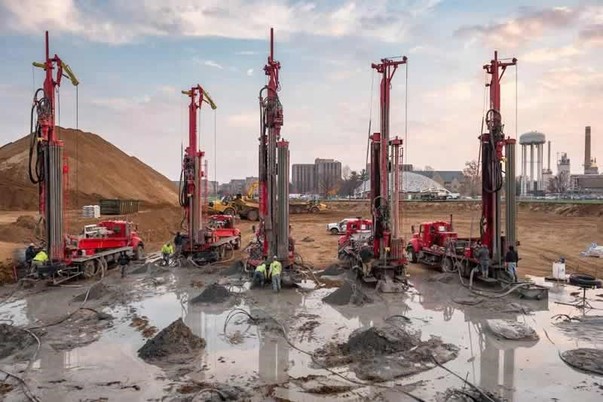 The third phase, currently under construction, is the installation of approximately 650 wells and 1,350 tons of capacity under what will become the new Ricci Athletic Fields on the north end of campus. This system will connect to a new remote chiller plant to be located just east of Wilson Drive. Connecting this geothermal field to the plant will increase flexibility by allowing the field to serve both the central chilled water cooling system and a new regional east campus hot water heating system.

When completed, these three systems together will have the capacity to reduce Notre Dame’s carbon dioxide emissions by 11,803 tons, an 8 percent reduction compared to fiscal year 2016 and the equivalent of taking almost 1,000 cars off the road each year.

The total capacity of all of the proposed systems is 7,000 tons, or approximately one-half of the University’s current peak demand during the cooling season.

“Because geothermal systems transfer heat from one place to another instead of burning fossil fuels like conventional boilers, they emit no greenhouse gasses. This reduces pollution and improves air quality,” said Linda Kurtos, director of sustainability. “Additionally, closed-loop systems like those being installed at Notre Dame don’t consume any water. The system is filled and the water is pumped through the well field where energy is transferred; these systems improve the sustainability of the system and the campus as a whole.”

Compared to other renewable energy sources, geothermal applications have a positive return on investment as installation costs are quickly recouped through energy cost savings. The estimated capital cost of the systems currently being installed on Notre Dame’s campus is approximately $40 million. The University expects to see a return on investment in about 15 years.

Additionally, harnessing geothermal energy does not directly involve the combustion of any fuel; rather it uses electricity and a higher efficiency energy cycle, thus limiting the impact of energy cost fluctuations, and allows for more sustainable sources of energy production to be utilized to provide the electricity, thereby increasing Notre Dame’s energy and financial security.

Notre Dame joins more than 100 colleges across the country that currently use geothermal as a campus energy source. In fact, the nation’s largest closed loop geothermal system to date is in Notre Dame’s backyard at Ball State University, 140 miles to the south in Muncie, Indiana.

In addition to geothermal, the University is looking to expand its renewable energy portfolio to include a 2.25 megawatt hydroelectric project on the St. Joseph River in partnership with the City of South Bend, large-scale regeneration through the installation of a heat recovery system at the power plant to support east campus, as well as several potential solar projects.