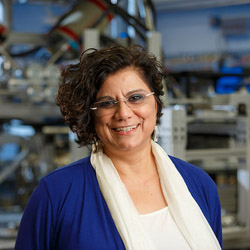 Ani Aprahamian, the Frank M. Freimann Professor of Physics at the University of Notre Dame, has been elected to chair of the American Physical Society’s Division of Nuclear Physics for 2014-2015. The Division of Nuclear Physics, founded in 1966, involves scientists and educators who focus on understanding nuclei, the first moments of the universe, the origin of the elements, and the potential application of nuclei and nuclear techniques for social benefit. It is one of 14 divisions in the American Physical Society.

Aprahamian also has been named chair of the Advisory Committee forPhysics Today, the flagship publication of the American Institute of Physics.  Physics Today, the world’s leading physics magazine, reports on research, technology, and the relationship between science and society. It maintains an Internet presence, Physics Today Online (PTOL) with an archive and additional content.

Aprahamian’s research focuses on the evolution of nuclear structure and the impact of various structure effects on stellar and explosive astrophysical processes. She has given more than 160 invited talks at national and international conferences, and she has more than 150 publications.