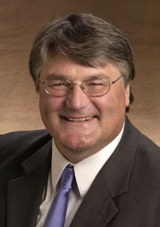 In the context of improving redox flow batteries (RFBs), over the past decade we have implemented a series of approaches that were informed by previous experience in PEM fuel cell technology. That effort yielded dramatic performance gains in vanadium redox flow battery (VRFB) power performance.  In addition to the splashy improvements in performance, we emphasized some basic characterization and understanding of processes occurring in the components of the. RFB, applicable much more broadly than in VRFBs.  Our approach is to consider ‘unit processes’ occurring in specific types of systems. These ‘archetypes’ include simple systems such as the VRFB but also systems in which we plate metals, use non-aqueous electrolytes or incorporate air electrodes. In this seminar, after a general description of RFB characteristics and the deployment as well as an overview of the VRFB work, I will discuss these advances and the generalization of our understanding to other flow battery types.

Thomas Zawodzinski is presently the Governor’s Chair in Electrical Energy Conversion and Storage, with appointments in the Chemical and Biomolecular Engineering Dept. at the University of Tennessee-Knoxville and at ORNL. He also is a Visiting Professor at the University of Padua and was a Royal Academy of Engineering Distinguished Visiting Research Fellow at Imperial College.  He previously was the Ohio Eminent Scholar in Fuel Cells, Director of the Case Advanced Power Institute, and the founding Director of the Wright Fuel Cell Group. Dr. Zawodzinski is a Fellow of the Electrochemical Society and of the American Chemical Society Polymer Division.  Recently he was awarded the Electrochemical Society Energy Technology Division Research Award. Dr. Zawodzinski was the PI for the Wright Center for Fuel Cells in Ohio, a $60M joint multi-university & industry center devoted to commercialization. Before moving to Case Western Reserve University, from the time of his post-doc through 2002, Zawodzinski played a leading role, including as Team Leader, in establishing the Los Alamos Fuel Cell program. Recent work focuses on extending the lessons learned from fuel cell research to areas such as redox flow and metal-air batteries as well as developing next-generation components for electrochemical systems.

He has published more than two hundred refereed papers and a number of book chapters, holds five patents with several more pending, has co-edited several books on fuel cells and related topics, and has been an active public speaker with hundreds of presentations and short courses given around the globe on fuel cell, electrochemical device and sensor-related topics and research.  He has served on Technical Advisory Boards of several companies, including a recent start-up from his lab, and the International Editorial Board for J. Power Sources.

Dr. Zawodzinski received his Bachelor’s and Ph.D. degrees from the State University of New York at Buffalo. His Bachelor’s studies were in Chemistry and Cell/Molecular Biology and his Ph.D. work, under the supervision of Robert Osteryoung, focused on Room Temperature Chloroaluminate Molten Salts.

Seminar sponsored by the Department of Biomolecular and Chemical Engineering