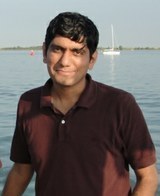 Heterogeneous catalysis is a prominent means to upgrade carbon sources to chemicals and energy carriers. Designing an “optimal” catalytic system is an open multi-faceted problem requiring analysis and decision making at many levels – from understanding molecular events to elucidating complex reaction networks, identifying suitable catalysts, and optimizing reactor performance. My research, to this end, brings disparate yet complementary tools from systems engineering, informatics, and computer science for detailed modeling and design of heterogeneous catalytic processes.

In this talk, I will focus on these multiple facets. First, several catalytic processes tend to be complex in that the underlying reaction system comprises of several hundreds to thousands of species and reactions, thereby precluding any form of comprehensive manual analysis. I will present a new rule-based computational tool, Rule Input Network Generator (RING), to construct and analyze the mechanisms of such complex networks. RING can construct an exhaustive network of all plausible reactions and species of a system and identify reaction pathways forming a specific product through rule-based queries and “prune” out energetically infeasible pathways. I will demonstrate the utility of this tool through examples involving mechanism identification in polyol conversion over transition metals. Second, I will show, using density functional theory, how studying molecular events such as adsorption can be used to derive structure-property relationships that elicit details of catalytic reactivity and selectivity. Specifically, I will discuss how electronic structure calculations of adsorption of organonitrogen compounds present in vacuum gasoil on the active sites of industrial hydrotreating catalysts gives insights into the inhibition of hydrodesulfurization chemistry.  Third, designing optimal catalysts require mathematical tools to identify catalytic parameters in conjunction with inputs from (and feedback to) experiments and computational chemistry. I will present new methods that leverage nonlinear optimization approaches to (i) rigorously identify active sites and surface environment of catalysts, and (ii) identify “optimal” energetic parameters that maximize observable catalytic properties such as rate, selectivity, etc.

Srinivas is a postdoctoral researcher working with Profs. Manos Mavrikakis and Christos Maravelias at University of Wisconsin-Madison. He obtained his PhD in Chemical Engineering at University of Minnesota in 2013 under the advisorship of Profs. Prodromos Daoutidis and Aditya Bhan. Srinivas is originally from India and did his undergraduate studies at Indian Institute of Technology Madras.

This seminar is sponsored by the Department of Chemical and Biomolecular Engineering at the University of Notre Dame.