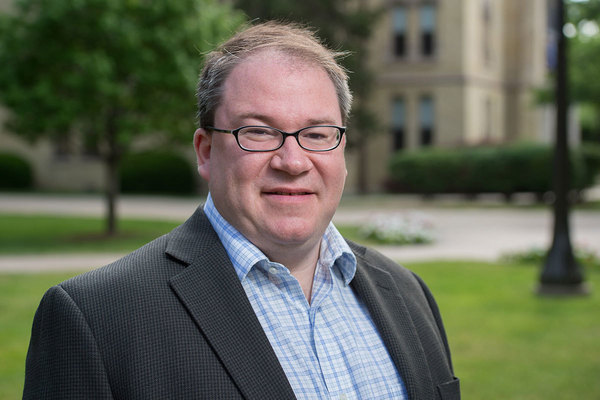 Steven A. Corcelli, Professor of Chemistry & Biochemistry, has been appointed the College of Science’s first Associate Dean for Interdisciplinary Studies and Faculty Development.

In his new role, Corcelli will oversee searches for faculty for different interdisciplinary groups, such as the Stavropolous Center for Interdisciplinary Biophysics and the neuroscience major, among others. He will also oversee professional development for faculty.

Mary Galvin, the William K. Warren Foundation Dean of the College of Science, developed the associate dean position after deciding it was critical for the college to further engage and build interdisciplinary research programs that include faculty from several areas of science.

Corcelli’s appreciation for interdisciplinary work made him a natural fit for the job, according to Galvin. Corcelli also is passionate about faculty development, and said he is particularly interested in creating opportunities to empower and develop junior faculty. He’s planning a new onboarding program and hopes to provide opportunities for other types of training.

"Professor Corcelli has the organizational and administrative skill set to succeed in the role,” Galvin said. “He is an excellent researcher and teacher too, and he knows many of the faculty members throughout the college, which will allow him to connect researchers who study in different fields.”

Science has become so interdisciplinary during recent years that it’s important to fully embrace that within the college, according to Corcelli. “It’s a great strategy for the College to leverage resources specifically for interdisciplinary endeavors,” he said.

Corcelli has served as director of graduate studies and as associate chair of the Department of Chemistry & Biochemistry. He is presently a Provost Fellow and is leading task forces on graduate student well-being, mentoring and anti-bullying. Since 2012 he has also been active on the Graduate Education Advisory Board of the American Chemical Society, including serving as Chair from 2015-2017.  In addition, Corcelli was a co-principal investigator on a GAANN award from the U.S. Department of Education to improve graduate education in areas of national need.

He is a fellow of the American Chemical Society and has received numerous awards including a Camille and Henry Dreyfus New Faculty Award, a National Science Foundation CAREER Award, a Sloan Research Fellowship, a Kavli Fellowship, multiple Rev. Edmund P. Joyce Awards for Excellence in Undergraduate Teaching, and the Notre Dame Director of Graduate Studies Award.

Originally published by Rebecca Hicks at chemistry.nd.edu on November 27, 2019.