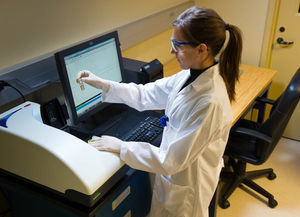 A University of Notre Dame research center has once again been designated an Energy Frontier Research Center (EFRC) by the U.S. Department of Energy (DOE) and will receive funding to help accelerate the scientific breakthroughs needed to build the 21st-century energy economy.

The Notre Dame EFRC, titled “Materials Science of Actinides,” was first designated as an EFRC in 2009 along with 45 other centers. This year, DOE awarded $100 million in funding to 32 projects. Ten of this year’s projects are new, while the rest received their funding based on both their achievements to date and the quality of their proposals. The 32 projects receiving funding were selected from more than 200 proposals.

The Notre Dame EFRC, which is directed by Peter Burns, Henry J. Massman Chair and Professor of Civil Engineering and Geological Sciences and concurrent professor of chemistry and biochemistry, received a $12 million, four-year grant.

“With this renewed funding, we will continue to focus the efforts of a team of gifted scholars on issues related to nuclear energy that are of great importance to the nation,” Burns said. “The center structure allows us to unite experts from several disciplines to address scientific challenges that would be intractable with smaller, discipline-specific funding models. Continuation of the center also permits us to provide the best possible education to students at all levels who are involved in our research program.”

The focus of the center, which includes participants from several other universities and a national laboratory, is the elements that are the basis of nuclear energy — uranium, plutonium and other actinides. Research in the center will seek to understand and control materials that contain actinides at the nanoscale, which is about one-millionth of the size of the tip of a ball-point pen. This research is intended to lay the scientific foundation for advanced nuclear energy systems that may provide much more energy while creating less nuclear waste.

“We are mobilizing some of our most talented scientists to join forces and purse the discoveries and breakthroughs that will lay the foundation for our nation’s energy future,” U.S. Energy Secretary Ernest Moniz said in announcing the centers. “The funding we’re announcing today will help fuel scientific and technological innovation.”

A National Research Council report, titled “Assuring a Future U.S.-Based Nuclear and Radiochemistry Expertise,” stated: “The growing use of nuclear medicine, the potential expansion of nuclear power generation, and the urgent needs to protect the nation against external nuclear threats, to maintain our nuclear weapons stockpile, and to manage the nuclear wastes generated in past decades, require a substantial, highly trained, and exceptionally talented workforce.”

Since its establishment in 2009, Notre Dame’s Materials Science of Actinides EFRC has supported 32 graduate students, including 16 women, in actinide sciences, eight of whom have graduated; 28 post-doctoral researchers; 53 undergraduate researchers, including 29 women; and it has hosted 19 visiting scholars. The center has organized and taught three short courses with 172 total participants, and organized five sessions at national and international conferences.

Originally published by William G. Gilroy at news.nd.edu on July 03, 2014.