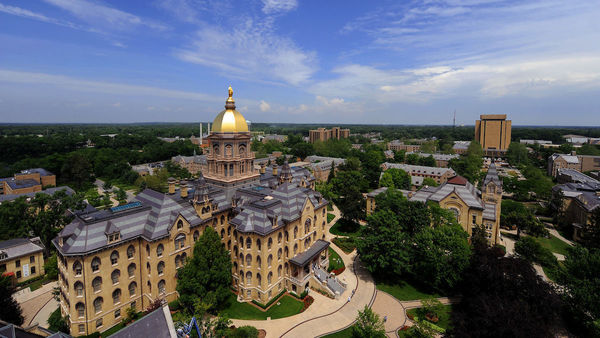 The University of Notre Dame will face Clemson University for the first time in the postseason when they take the field for the 2018 College Football Playoff semifinal in the Cotton Bowl, but the two universities share a long history of collaboration in research.

Together, researchers from Notre Dame and Clemson are breaking down the causes of health epidemics, expanding our knowledge of planet formation and analyzing the interactions between humans and machines.

In the U.S., the number of seriously overweight or obese people has gone from alarming to epidemic. Chronic diseases brought on by being overweight or obese make both conditions the second leading cause of preventable death in the country. Notre Dame’s I.A. O’Shaughnessy Dean of the College of Arts and Letters and Professor of Sociology Sarah Mustillo and Clemson Department of Sociology, Anthropology, and Criminal Justice Assistant Professor Miao Li research how adverse childhood experiences such as poverty, maltreatment or parent drug use affect children’s health into adulthood, including the likelihood of being overweight or obese. Mustillo and Li, who was a postdoctoral researcher under Mustillo, are among the first researchers to use nationally representative data from one of the world’s longest studies on poverty to study obesity.

The researchers found that very early childhood, from 0-4 years of age, is a critical period in which exposure to economic hardship has a long-term impact on excess weight and obesity. Even if things get better financially for a family after these critical years, the damage is likely done.

Using high-resolution infrared observations from Mauna Kea, Hawaii, Terrence Rettig, professor of astrophysics in the Department of Physics at Notre Dame, and Sean Brittain, professor of physics and astronomy at Clemson University, have collaborated on research projects involving the evolution of gas and dust in disks around young stars. Brittain received his Ph.D. in physics at Notre Dame.

Rettig said Brittain has continued the program and has become a highly respected leader in the field. The infrared spectroscopy program has been ongoing for nearly 20 years, beginning as an exploration of comets that evolved to explore gas disks around young stars where planets form.

“Gas and dust within these very young disks does not remain available for more than a few million years to form planets,” Rettig said. “So in order to form planets, they must do it, rather quickly, within that time frame. This research provides a better understanding of planet-forming regions and helps to clarify how the very early planets, such as Earth, might have evolved.”

Panos Antsaklis, the H. Clifford and Evelyn A. Brosey Professor in the Department of Electrical Engineering at Notre Dame, and Yue Wang, the Warren H. Owen-Duke Energy Associate Professor of Engineering at Clemson, examine ways to design engineering systems that exhibit a high degree of autonomy in performing tasks. As a postdoctoral researcher at Notre Dame, Wang worked with Antsaklis to study the interactions between digital computers, engineered physical systems and humans, using energy concepts such as passivity, to design Cyber Physical Networked Embedded Systems.

“The goal is autonomy,” Antsaklis said. “You want to build machines that do things by themselves. Applications like the autonomous cars you see now are an extension of these systems.”

Antsaklis’ current research focuses on addressing problems in the areas of control, computing and communication networks and on hybrid and discrete event dynamical systems. Specifically, he studies those concepts as they relate to drones and ground vehicles, to determine how to equip drones to perform missions with a high degree of autonomy during emergencies like wildfires or when conducting inspections at various locations, including pipelines — without the need for continuous human control.

Notre Dame will face off with Clemson in the Goodyear Cotton Bowl in Arlington, Texas, on Dec. 29.

Originally published by Colleen Sharkey and Jessica Sieff at news.nd.edu on December 18, 2018.