The first-ever ND Energy Bouts: Fighting for Renewable Energy drew a huge crowd in Jordan Hall of Science on Feb. 12 with fans eager to see who would take the win. Since all three contenders were representing low-carbon energy sources, it was a fight to the finish that kept the audience participants on the edge of their seats. The main contenders were none other than Notre Dame’s three most prominent experts in renewable energy. 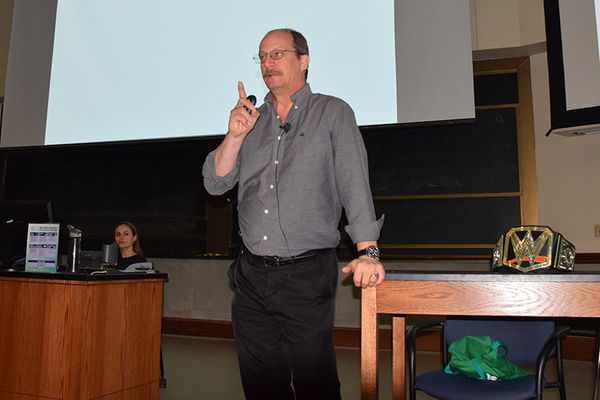 In the first corner was Peter C. Burns representing nuclear. Burns is the Henry J. Massman Professor of civil and environmental engineering and earth sciences; concurrent professor of chemistry and biochemistry; director of the Center for Sustainable Energy at Notre Dame (ND Energy); and director of the NNSA Actinide Center of Excellence (ACE).

In the second corner representing wind was Thomas Corke. Corke is the Clark Equipment Professor of Engineering in the Department of Aerospace and Mechanical Engineering; director of the Hessert Laboratory; and director of the Institute for Flow Physics and Control.

And in the third corner was Prashant Kamat representing solar. Kamat is the Rev. John A. Zahm Professor of Science in the Department of Chemistry and Biochemistry and Radiation Laboratory; and concurrent professor of chemical and biomolecular engineering. 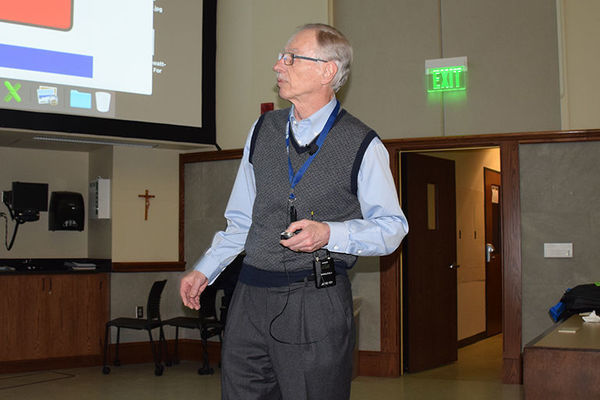 The three contenders were joined by special guest and moderator, Khalil Shalabi (’88), newly appointed Executive Vice President for Strategic Initiatives and Transformation with the Lower Colorado River Authority (LCRA). As the former Vice President for Market Operations and Resource Planning at Austin Energy and the New York Power Authority, Shalabi has experience in the business of solar, wind, and nuclear, and served as an excellent fact-checker throughout the bout.

Each contender had 8-10 minutes in the ring to verbally jab, cross, hook and uppercut their way to the win, which meant getting the most audience votes at the end and earning up to $100 million in virtual research funding. Each round was fact-checked by Shalabi who also made sure the audience understood the business side of each renewable energy source. 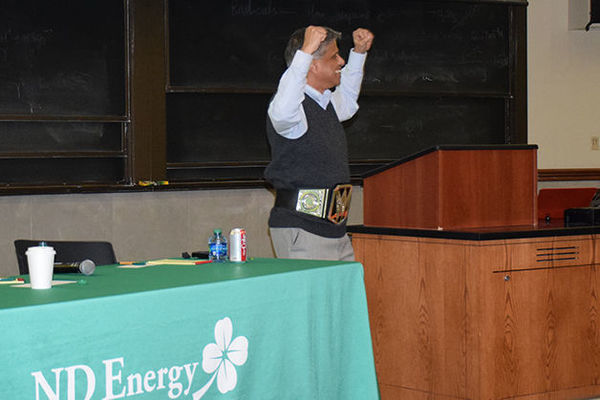 All contenders were winners and will do great things with their research funding. As for the audience participants, it was a great way for them to learn and still have some fun. Each participant hopefully left with more knowledge and a better understanding of renewable energy than when they arrived. Below are some of the interesting facts and information shared by the contenders.

Congratulations to all contenders for their grit, tenacity, and perseverance, and especially to Kamat for securing the win and gaining the inaugural title of ND Energy Heavy Weight Champion of Renewable Energy.

The ND Energy Bouts: Fighting for Renewable Energy was modeled after Notre Dame’s Bengal Bouts, which was first organized by legendary football coach Knute Rockne in 1920, and continues the tradition of sportsmanship, safety and competitive spirit! This event was co-sponsored by ND Energy and the Notre Dame Energy and Resources Club.

ND Energy is a University Research Center whose mission is to build a better world by creating new energy technologies and systems and educating individuals to help solve the most critical energy challenges facing our world today. For more information, visit the ND Energy website at energy.nd.edu or contact Barbara Villarosa, Business and Communications Program Director, at bvillaro@nd.edu or 574-631-4776.