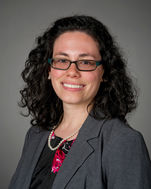 The Office of Science of the Department of Energy has named Amy E. Hixon, an assistant professor in the University of Notre Dame’s Department of Civil & Environmental Engineering & Earth Sciences, a 2017 Early Career Award winner. She is one of only 59 honorees across the country. Established in 2010, the program was developed to recognize exceptional researchers during the crucial early years of their careers, when many scientists do their most formative work.

Hixon and her group focus their efforts on chemical processes at the solid-solution interface, specifically those which control actinide behavior. Using a combination of wet chemistry, instrumental, and modeling techniques, the Hixon team is working to better understand the physical and chemical properties of the actinide elements, mineral surfaces and how the two interact so they can better predict actinide behavior in natural and engineered systems. This focus on the actinide elements is the foundation of her Early Career Research Program research, “Understanding the Chemical Complexity of Multi-component Systems: Uranium Polyoxometalates as Nanosorbents.”

The first actinide element, uranium, was discovered in the late 1780s. Today, the entire actinide series consists of 15 elements, which carry great societal importance due to their use in medicine, power generation, national security, and nuclear waste management. They require special handling and storage as many of them are radioactive and have long half-lives. They can also be mobile, interacting with and leaching into the environment, which can pose a long-term health risk.

As part of the Early Career Research Program, Hixon will be addressing knowledge gaps in the chemistry of the actinide elements uranium, neptunium, plutonium, and americium. She and her team will be tracking the thermodynamics and kinetics of these elements as they interact to and bond with nanometer-sized uranyl peroxide cage clusters. This is the first study that uses actinide materials [the uranyl peroxide cage clusters] as nanosorbents for other actinide elements. The already well-defined structure of the clusters makes them the perfect experimental model for other metal oxide surfaces.

Hixon earned her doctoral and master’s degrees, both in environmental engineering and earth science, from Clemson University. While a doctoral candidate at Clemson, she also held a position with the U.S. Nuclear Regulatory Commission in the Office of Federal and State Materials and Environmental Management Programs. She received her bachelor’s degree, which was in chemistry, from Radford University.

Originally published by Nina Welding at engineering.nd.edu on August 17, 2017.