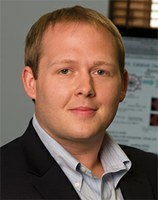 Jason Hicks, assistant professor of chemical and biomolecular engineering, is featured as a “Leader in Engineering Education” by the American Society of Engineering Education. He was one of several young faculty who have been highlighted by the organization as campus stars because of their contributions and dedication — inside and outside of the classroom — to the engineering programs at their individual universities and to their students.

Hicks, who focuses on organic/inorganic hybrid catalysts, catalytic conversion of biomass to fuels, and the synthesis and characterization of materials and catalysts, also recently received the Frank O’Malley Undergraduate Teaching Award from the University. He teaches chemical reaction engineering as well as process design.