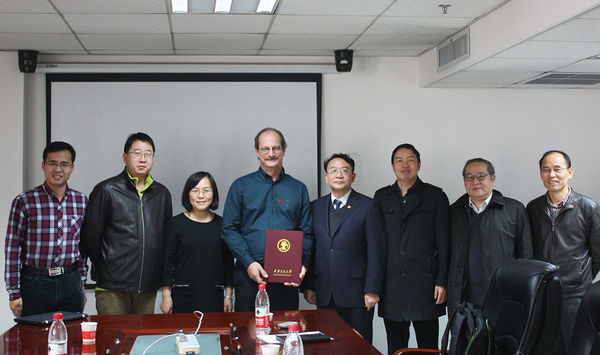 An esteemed professorship is one of the highest honors at Xi'an Jiaotong University and only conferred to a person who has made a significant contribution to his or her research area.

Burns was nominated by Jie Qiu, a former post-doctoral student who researched polymer physics and actinides under his direction. She now serves as a professor at Xi’an Jiaotong University.

"Prof. Burns has made a significant contribution to actinides, especially actinide mineralogy and actinide materials with well-controlled nanostructures," said Qiu. "His research is very important for the advanced nuclear fuel cycles."

“It was a great honor for my research to be recognized by one of the leading engineering universities in China. Especially considering our mutual interest in sustainable energy,” Burns said.

To date, he has published more than 430 papers in top-ranked journals including Science, JACS, and Chemical Review. Additionally, he has supervised more than 60 graduate students and post-doctoral students.

"As an honorary professor, Prof. Burns will significantly promote the development of the School of Nuclear Science and Technology at Xi'an University due to his international reputation," said Qiu

Originally published by Allison Preston at ceees.nd.edu on December 6, 2018.