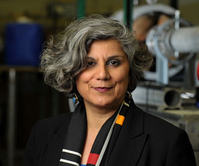 Ani Aprahamian, Freimann Professor of Physics, has been named co-chair of a committee with the National Academy of Science on a U.S. Electron Ion Collider Facility.  The committee will assess the scientific justification of a U.S. facility taking current international plans and existing domestic facility infrastructure into consideration. It will address the role that a facility could play in the future of nuclear physics, considering the field broadly, but placing emphasis on its potential scientific impact on quantum chromodynamics. Aprahamian will co-chair the committee with Prof. Gordon Baym of the University of Illinois. The study will begin immediately, the committee will meet in December, and will conclude in 2017.

Originally published by Shelly Goethals at physics.nd.edu on October 17, 2016.