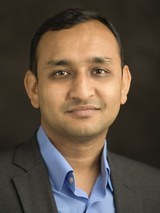 Heterogeneous catalysis enables the conversion of hydrocarbon resources to essential chemicals that make modern life possible. Advancement of catalytic technologies for more efficient energy and carbon utilization as well as for adaptation to changing feedstocks is essential for a sustainable future. Shale gas boom has led to increased availability of small hydrocarbons such as ethane and propane, requiring processes that dehydrogenate alkanes to alkenes instead of deriving the alkenes from cracking of larger hydrocarbons. Most current technologies for alkane dehydrogenation depend on endothermic non-oxidative process that impose significant energy demand and challenges with coking and regeneration of catalysts and reactors. Oxidative conversion of these hydrocarbons can potentially lead to more energy efficient and coking resistant processes but suffer from overoxidation of desired products.

In this talk, I will describe our recent work combining kinetic measurements and density functional theory to advance the understanding of structure-function relations in selective oxidative conversions of alkanes. Specifically, I will show how small one-dimensional pores (~ 0.4 nm) in M1 phase crystalline mixed metal oxide catalysts enhance selectivity to ethylene in ethane oxidative dehydrogenation by tightly confining and stabilizing ethane molecules and C-H activation transition states and by suppressing secondary reactions via steric hindrance to C-O bond formation between C-atoms of ethylene and O-atoms within the pores of oxides. These selectivity enhancements occur because ethylene contains stronger C-H bonds than ethane, and therefore, its facile secondary reactions much involve an initial C-O bond formation instead of direct C-H activation. The same pore geometry is not efficient for propane oxidative dehydrogenation because in this case the product propene contains C-H bonds that are much weaker than alkanes and can undergo rapid secondary C-H activations. For this case, I will share an example of how selectivity limitations can be partially mitigated by generation of OH radicals that suppress bond-strength dependence of reaction rates because of their high abstractor-strength for abstracting H-atoms from C-H bonds. These examples illustrate how properties of reactive molecules and catalysts together determine product distributions. Such understanding useful for establishing fundamental requirements and limitations to designing better catalysts.

Prashant Deshlahra joined as an Assistant Professor in the Department of Chemical and Biological Engineering at Tufts University in 2016. His lab is focused on engineering of heterogeneous catalysts for efficient conversion of small hydrocarbons to essential chemicals. He received his bachelor’s degree in Chemical Engineering from IIT Bombay and his Ph.D. in Chemical Engineering from the University of Notre Dame in 2012, performing his dissertation research with Professors Eduardo Wolf and William Schneider on spectroscopic and computational probes of electric fields near catalyst-support interfaces. His postdoctoral research with Professor Enrique Iglesia at UC Berkeley was focused on developing reactivity descriptors for acid and oxidation catalysis of alcohols on polyoxometalate clusters. His research has been recognized with Eli J. and Helen Shaheen Graduate School Award from Notre Dame in 2012 and ACS PRF Doctoral New Investigator Award in 2017.