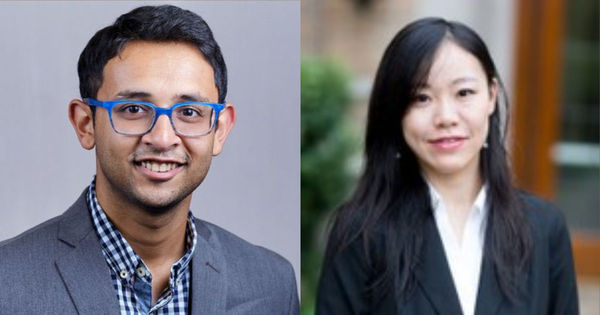 The Haber-Bosch process for catalytic ammonia synthesis (N2 + H2 → NH3) is one of mankind’s most important inventions. Ammonia is an essential component of inorganic fertilizers and is responsible for feeding over half the world's population. Even with the best-known catalysts, the process is very energy intensive, and requires very high pressures (100-200 atm) and temperatures (700-800 K) to be feasible. Finding ways to synthesize ammonia at milder conditions is one of the grand challenges for sustainable production.

The harsh temperature and pressure requirements for ammonia synthesis stem from the constraints imposed by mother nature on conventional catalysts—materials that can activate the robust N2 triple bond easily also interact with adsorbed intermediates too strongly to allow further reaction. In other words, linear correlations between the activation energy for N2 dissociation and the adsorption energies of surface intermediates limit the maximum achievable reaction rates. In this talk, I will discuss the potential to bypass these limitations to enable near-ambient ammonia synthesis by coupling catalysts with non-equilibrium electric discharge plasmas.

The central idea is to utilize activated (e.g. vibrationally or electronically excited, ionized, or dissociated) nitrogen species created in non-thermal plasmas to assist catalysis. We marry first-principles models of surface reactivity with concepts from plasma science to understand the impact of these excited nitrogen species on ammonia synthesis reaction rates over a series of metal catalysts. The model predicts that ammonia synthesis rates in the presence of plasma excitation are greatly enhanced over thermal rates for a given bulk temperature and pressure. Further, optimal catalyst materials and active sites in the presence of plasma excitation are altered from those for thermal catalysis, potentially allowing for atom-efficient catalysis with less expensive materials. Ammonia synthesis rates observed in a dielectric barrier discharge plasma reactor confirm that ammonia is produced over metal catalysts at conditions far removed from Haber-Bosch, as well as the shift in optimal catalyst. The work represents one of the first examples of the computationally guided design of plasma-catalyst systems and an important step forward in connecting plasma catalysis to well-established concepts of thermal heterogeneous catalysis.

Biography
Prateek Mehta is a PhD student in Bill Schneider's research group at the University of Notre Dame. He obtained his MS in Chemical Engineering at Carnegie Mellon University (where he worked with John Kitchin), and his undergraduate degree from the National Institute of Technology, Durgapur, India. His research interests involve the use of modeling and simulation to design new materials for energy conversion and storage. Prateek has also held short-term research positions at Bosch, Lawrence Livermore National Lab, the University of Antwerp (Belgium) and the Dutch Institute for Fundamental Energy Research (Eindhoven, Netherlands). His graduate work has been recognized by several awards, including the CoMSEF graduate student award from the American Institute of Chemical Engineers, the Kokes award from the North American Catalysis Society, and the Notre Dame Center for Research Computing Award for Computational Sciences and Visualization. He has also received two teaching awards at Notre Dame. Prateek is an instructor for the Software Carpentry Foundation, and has also served as president of the Notre Dame CBE Graduate Student Organization.

Lithium-ion batteries have become widely used due to their high-energy density and variety of cell types. Due to the wide range of organic solvents that could be used for electrolyte applications, there is a need for accurate and efficient methods of predicting key properties. Using molecular dynamics simulations is one such method, but current force field parameters do not adequately reproduce experimental quantities. To address this concern, we developed an automated framework that scales three parameters together to optimize four battery-related properties at the same time using Latin Hypercube Sampling. We then presented the Pareto frontier and feasible region for this multi-objective optimization problem. The modified parameters were evaluated by re-computing the four properties using molecular dynamics simulations.

Biography
Yushan Zhang is currently a fifth-year PhD student in Dr. Edward Maginn’s and Dr. Mark McCready’s research groups at the University of Notre Dame. She has been working on applying modeling and simulation techniques to various topics such as carbon capture, membrane separation, and classical force field development. Yushan has interned at IBM-Dublin, Lawrence Berkeley National Lab, and Princeton University. She has served as an officer in several clubs including CBE Graduate Student Organization, International Student and Scholar Affairs, and Grad-Society of Women Engineers.