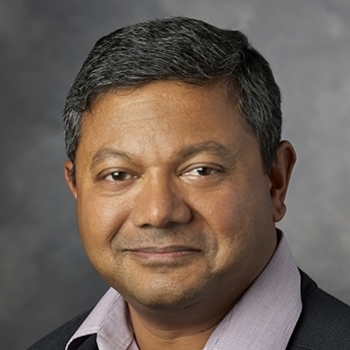 After more than a hundred years of historic success, the fundamentals of the energy industry are rapidly changing driven by technology innovations and cost reductions in unconventional oil and gas, renewable electricity from solar and wind, as well as lithium-ion batteries as the basis for electrification of transportation.  While these are helping decarbonize the energy system, it is not sufficiently rapid to keep the global average temperature rise below 2 oC.  How can we accelerate transition to a more sustainable energy system? What new technologies or policies do we need to create? This talk will provide a snapshot of various trends and offer some thoughts on addressing this paramount global challenge. In particular, it will focus on a few topics where science and engineering could play a disproportionate role in transforming the energy system.

Dr. Arun Majumdar is the Jay Precourt Provostial Chair Professor at Stanford University, a faculty member of the Departments of Mechanical Engineering and Materials Science and Engineering (by courtesy) and co-director of the Precourt Institute for Energy, which integrates and coordinates research and education activities across all seven Schools and the Hoover Institution at Stanford.

Dr. Majumdar's research in the past has involved the science and engineering of nanoscale materials and devices, especially in the areas of energy conversion, transport and storage as well as biomolecular analysis. His current research focuses on using electrochemical reactions for thermal energy conversion, thermochemical water splitting reactions to produce carbon-free hydrogen, understanding the limits of heat transport in nanostructured materials and a new effort to re-engineer the electricity grid.

In October 2009, Dr. Majumdar was nominated by President Obama and confirmed by the Senate to become the Founding Director of the Advanced Research Projects Agency - Energy (ARPA-E), where he served till June 2012 and helped ARPA-E become a model of excellence for the government with bipartisan support from Congress and other stakeholders. Between March 2011 and June 2012, he also served as the Acting Under Secretary of Energy, enabling the portfolio that reported to him: Office of Energy Efficiency and Renewable Energy, Office of Electricity Delivery and Reliability, Office of Nuclear Energy and the Office of Fossil Energy, as well as multiple cross-cutting efforts such as Sunshot, Grid Tech Team and others that he had initiated. Furthermore, he was a Senior Advisor to the Secretary of Energy, Steven Chu, on a variety of matters related to management, personnel, budget, and policy.  In 2010, he was of Secretary Chu’s team that helped stopped the leak in the Deep Water Horizon (BP) oil spill.

After leaving Washington, DC and before joining Stanford, Dr. Majumdar was the Vice President for Energy at Google, where he created several energy technology initiatives, especially at the intersection of data, computing and electricity grid, and advised the company on its broader energy strategy.

Prior to joining the Department of Energy, Dr. Majumdar was the Almy & Agnes Maynard Chair Professor of Mechanical Engineering and Materials Science & Engineering at University of California–Berkeley and the Associate Laboratory Director for energy and environment at Lawrence Berkeley National Laboratory.

Dr. Majumdar received his bachelor's degree in Mechanical Engineering at the Indian Institute of Technology, Bombay in 1985 and his Ph.D. from the University of California, Berkeley in 1989.