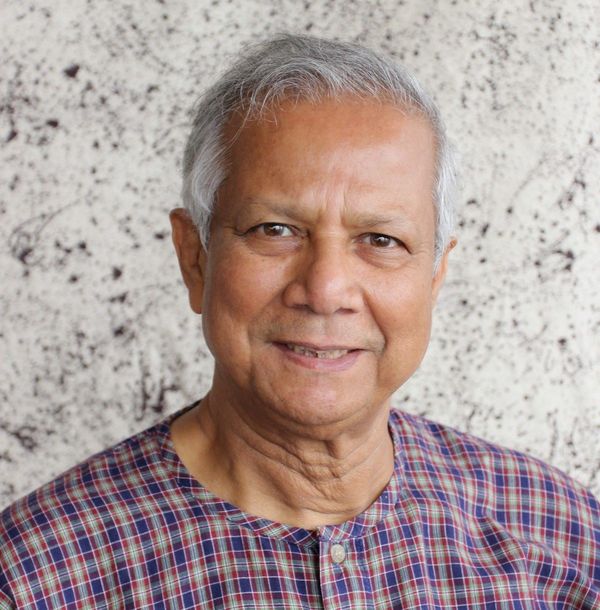 Muhammad Yunus, a social entrepreneur, banker and economist from Bangladesh who was awarded the Nobel Peace Prize in 2006 for founding the Grameen Bank and pioneering the concepts of microcredit and microfinance, will deliver a keynote address at 7 p.m. April 12 (Thursday) in the Dahnke Ballroom of the Duncan Student Center as part of this year’s Notre Dame Forum.

The event is free and open to the public. Doors open at 6:00 p.m. If seeking seating for a class or group, please email Clare Mundy in the Office of the President by April 6 (Friday).

Yunus will discuss his pioneering work in the field of poverty alleviation and sustainability with Ray Offenheiser, director of the Notre Dame Initiative for Global Development in the Keough School of Global Affairs.

“Dr. Yunus has given his life to working for a world free of poverty both in Bangladesh and beyond,” said Rev. John I. Jenkins, C.S.C., the University’s president. “His practical vision, that the poor are reliable borrowers, has created the opportunity for millions of vulnerable women and families to join the formal banking system and secure access to critically important credit and savings services. His charismatic leadership beyond his native Bangladesh has inspired many others across the globe to follow his example.”

Yunus will also receive the Ford Family Notre Dame Award for International Development and Solidarity from the Kellogg Institute during his visit to campus. The award recognizes substantial contributions to human development through research, practice, public service or philanthropy.

Yunus’ work was inspired by his mother’s refusal to turn away anyone asking for help. He speaks to unleashing human creativity as the key to solving intractable problems such as poverty, unemployment, disease and environmental degradation.

“Each person has tremendous potential,” he writes in his recent book, “A World of Three Zeros: The New Economics of Zero Poverty, Zero Unemployment, and Zero Net Carbon Emissions,” which will be the subject of student reading and discussion groups prior to the Forum event. “She or he alone can influence the lives of others within the communities, nations, within and beyond her or his own time.”

He is renowned as the “banker of the poor” for his 1983 establishment of the Grameen Bank, which pioneered the extension of microcredit by giving small loans to Bangladesh’s rural poor, empowering borrowers — 97 percent of whom are women — to interrupt the cycle of poverty. Based on principles of trust and solidarity, it is a model that has since grown globally.

More recently, Yunus co-founded Yunus Social Business, a nonprofit venture fund that aims to bridge the gap between business and philanthropy by promoting social business as a sustainable alternative to long-term aid.

Honored by universities, governments and organizations around the world, Yunus has served on numerous international bodies, including the United Nations Foundation. In addition to the Nobel Peace Prize, he is the recipient of the U.S. Presidential Medal of Freedom (2009) and the Congressional Gold Medal (2013).