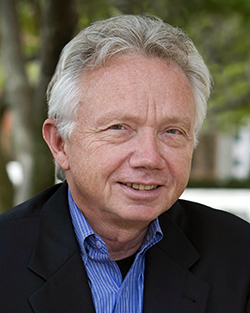 Dr. Richard Jackson will lecture on well-being and the built environment. Jackson is a public health expert and author of Designing Healthy Communities (J Wiley & Sons 2012), which links to the public television series of the same name. He is the 2015 recipient of the Notre Dame School of Architecture’s Henry Hope Reed Award in conjunction with the 2015 Richard H. Driehaus Prize at the University of Notre Dame. The award is given annually to an individual working outside the practice of architecture who has supported the cultivation of the traditional city, its architecture and art through writing, planning or promotion.

Dr. Richard Jackson is a pediatrician and environmental and public health expert.  He is currently a Professor and Chair of the Department of Environmental Health Sciences at the UCLA School of Public Health, with appointments in the Institute of the Environment & Sustainability; Urban Planning; and Pediatrics in the School of Medicine. Much of his recent work has focused on how the “built environment,” including architecture and urban planning, affects health and sustainability. He has co-authored three books on the Built Environment and Health in addition to hosting the US Public Television series, Designing Healthy Communities.

Formerly, Dr. Jackson chaired the American Academy of Pediatrics Committee on Environmental Health, served as the Director of the National Center for Environmental Health at the CDC in Atlanta, and was Chief Public Health Officer in the State of California. He is the only medical doctor elected to the Board of the American Institute of Architects, and is an honorary member of the American Society of Landscape Architects. Recently, Dr. Jackson was inducted into the US National Academy of Sciences Institute of Medicine, one of the highest honors a doctor can receive. He has spoken as a keynote at hundreds of conferences globally, including for royalty in London, at the Vatican, and at the White House.

This lecture is cosponsored by the Eck Institute for Global Health, Office of Public Affairs, Center for Social Concerns and Center for Health Sciences Advising.