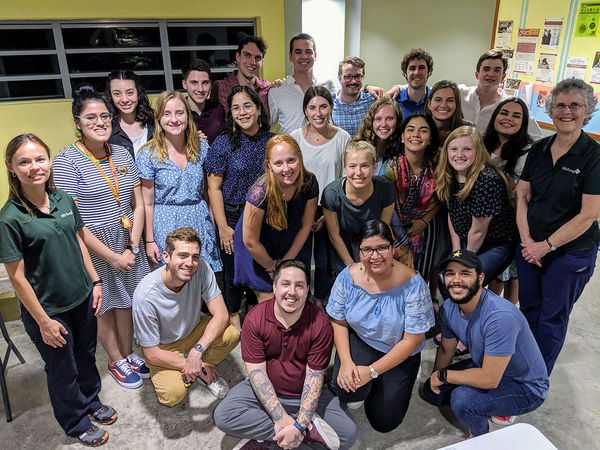 The University of Notre Dame’s Energy Studies Minor, administered by ND Energy and housed in the College of Engineering, strives to give undergraduate students a holistic understanding of the many challenges of the evolving energy future. Ethical, political, economic, business, and technical considerations should be brought together to create optimal solutions. This approach inspired a new course for the minor after Hurricane Maria devastated Puerto Rico’s energy infrastructure in 2017, leading to thousands of post-storm deaths and months of hardship as the crumbling infrastructure was pieced back together amid economic, political, and technological chaos.

Twelve Energy Studies minors participated in Puerto Rico: Road Map to a Renewable Future, a 1-credit seminar course, offered for the first time this fall. Six weeks of preparation led to a week of immersion on the island during fall break. Students celebrated Mass and interacted with students at the Universidad del Sagrado Corazón, learned from business and political leadership in San Juan, and visited an award-winning community center in the mountain town of Adjuntas. There was also time to appreciate the history and culture of Puerto Rico, including a tour of Castillo San Felipe del Morro and Old San Juan. Students viewed a protest march and could see graffiti left from the massive demonstrations this past summer that led to the resignation of two governors. After returning to Notre Dame, participants are required to launch targeted projects to act on what they learned and fulfill the civic engagement component of the course.

Two Notre Dame alumni were instrumental in organizing the first days in San Juan: Gilberto Marxuach-Torrós (’88), the president of Sagrado Corazón, and Ricardo Álvarez-Díaz (’96), co-founder and CEO of Álvarez-Díaz & Villalón Architecture & Interior Design (AD&V). They and their staff helped organize housing, a bilingual Mass, student-to-student conversation, meetings with key players in the future planning for Puerto Rico, and a private tour of the capitol building. 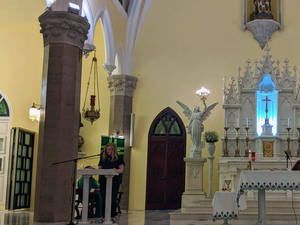 An important aspect of the course was to hear from as many Puerto Ricans as possible, beginning pre-trip with faculty and students on Notre Dame’s campus. While talking to their peers at Sagrado Corazón, students learned of concerns about the loss of family, friends, and professionals to the mainland after the hurricane. Disparities in public vs private education, the lack of knowledge about Puerto Rico’s status and circumstances in the continental U.S., a lack of local oversight leading to corruption in many sectors, and a lack of significant action by local government officials topped the list of problems important to those in attendance. One of the participants lived in the Midwest for most of her life, but lost her right to vote in national elections when she took up residency on the island. Alternatively, those who moved from the island to the mainland became eligible. The engagement among the students went well beyond the time allotted for the interaction, and they exchanged contact information before parting. 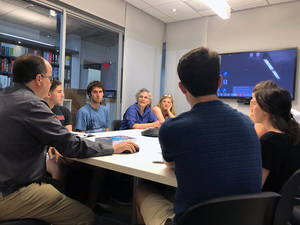 Monday and Tuesday were spent talking to five groups of key players in the energy recovery sector. Tomás Torres-Placa, executive director of the Institute for Competitiveness and Sustainable Economy (ICSE-PR), provided background context for the current state of the damaged electrical grid. He described the post-hurricane months, during which rich and poor alike were left without power and had loved ones die due to a lack of electricity. His group proposes a vision for an energy future that includes self-sufficiency, credibility, strong oversight, a modern regulatory framework, and the inclusion of energy cooperatives and towns in the transition to a new energy landscape. Students learned about The New Puerto Rico Energy Policy Act 17 that aims to redefine the grid and reaffirm a strong regulatory framework. It imagines an electrical system with a new focus on photovoltaics, a distributed grid, microgrids, and consumer generation capabilities. 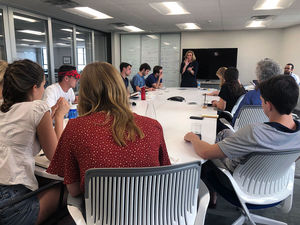 Former State Senator Ramón-Luis Nieves spoke of Puerto Rico’s energy history and the creation of the Puerto Rico Electric Power Authority (PREPA). He explained how this agency became a political tool with up to 400 jobs at its disposal each election cycle. As a self-regulating entity with little or no oversight, it did not raise rates enough over the years for fear of hurting the party in power. When attempts were made to reform the system, PREPA used its political clout to disregard or have new laws retracted. Instead, it issued illegal bonds to cover its operational costs and allowed the infrastructure to deteriorate, leading to its eventual filing for a form of bankruptcy pre-Maria. Nieves summarized the main points of a new law that calls for 100% renewable energy in Puerto Rico by 2050. Although these goals are ambitious and the pathway is not clear at this point, he summarized by emphasizing the need for a modern, decentralized, community-owned system with net metering and micro-grids.

While visiting the office of AD&V, students were able to see the features and innovations of the LEED Platinum building. Because imported petroleum products provide a majority of Puerto Rico’s energy, the price for commercial power is at least double what it is on the mainland. Investments that the firm made to reduce its air conditioning costs by 20% were paid off in eight months. By taking resiliency and safety characteristics into account, AD&V constructs projects in San Juan that value proximity to public transportation, lower water usage, support economic development, model lower density living, and integrate well into the preexisting communities. They are also exploring ways to mitigate the heat island effect in their designs. Tourism accounts for 7% of Puerto Rico’s Gross Domestic Product and AD&V sees this low figure as a source for future economic development. 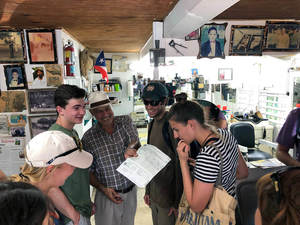 The final visit in San Juan was with ReImagina Puerto Rico, a non-profit created as a response to the fiscal and economic crisis magnified by Hurricane Maria. It is currently a program under the Center for a New Economy, a Puerto Rican think tank. Executive Director Malu Blázquez-Arsuaga and Project Manager Juan González-Moscoso explained their work to coordinate and align recovery efforts and reforms on the island in six sectors, including energy. They have proposed 97 specific recommendations with actionable goals and ways in which non-governmental organizations (NGOs) can collaborate with the Puerto Rican government to achieve progress. A few of their proposals include the establishment of energy backup systems, promoting hydropower, and the use of renewables to the greatest extent possible. They are also calling for the formation of resilient community centers throughout the island in preparation for the next natural disaster, with gardens, refrigeration, and a mapping of the most vulnerable citizens. 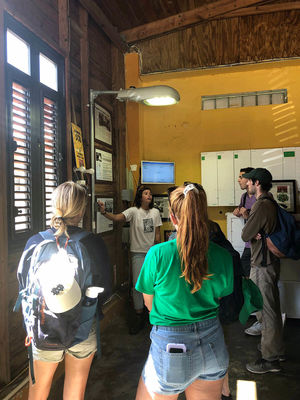 After three days in San Juan, the class headed for one such community center, Casa Pueblo, established in the town of Adjuntas decades before Hurricane Maria. Founder Alexis Massol-González overviewed their history, from the first rally against open-pit mining that attracted one person, through lessons learned in leadership, community building, and resiliency. Because their community center was solar powered with batteries at the time of Hurricane Maria, Casa Pueblo was up and running as an energy oasis as soon as the storm passed. They provided many life-saving services to the surrounding area, including electricity for communications, dialysis machines, refrigeration for medications, and solar powered lamps.

Students toured their solar-powered cinema, radio station, and community center; butterfly and hypoponic gardens; a cultural center for music and art; the Café Madre Isla coffee operation, and Bosque Escuela la Olimpia, an outdoor classroom in the forest above Adjuntas. They talked to a barber who is part of a plan to solarize the town square, saving each merchant money that will be paid forward so that others can participate. Researchers from the University of Michigan, led by Jose Alfaro, explained an experimental gasification project they are conducting that will convert coffee bean shells to energy for backup generators and also enrich the soil. In the forest, Casa Pueblo’s executive director, Arturo Massol-Deyá, led the group to the various stations where students from all over Puerto Rico learn about conservation, watershed protection, ecosystems, hydropower, biodiversity, and the scientific method. Educators from around the world visit this outdoor classroom in the hopes of replicating the model. 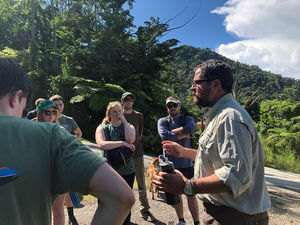 Dodging the intermittent rain, the class spent several hours in the theater with Arturo, talking about leadership, community development, and the future of energy on the island. Determined to avoid a model of dependency on Puerto Rican or U.S. governments, Casa Pueblo’s style relies on building social capital with action-based initiatives at the local level. There is frustration with the planners in the capital because the needs are great, but progress is very slow. Building pride in the community through arts and culture, educating businesses about the advantages of energy produced at the site of consumption, building beneficial partnerships with educational institutions and NGOs, and not being afraid to try new things are some of the keys to their success. A new initiative that the students learned about included a partnership with electric vehicle manufacturer Rivian and Alex Honnold, a climber featured in the documentary Free Solo, involving the donation of 700 solar panels and second-life batteries from electric cars. Casa Pueblo’s work has been featured in many news stories and documentaries, including National Geographic’s Paris to Pittsburgh and Google Earth’s After the Dark: The Movement to Light Up Puerto Rico with the Sun. 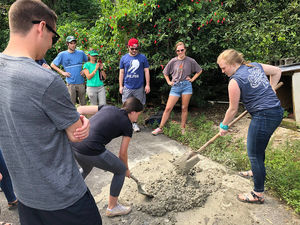 Perhaps the most impactful part of the week was the trip to “El Hoyo” for a service project and the opportunity to visit residence in their homes. Two families had solar panels installed by Casa Pueblo due to medical needs. Students heard firsthand about the life-saving advantages of having reliable energy, the sadness caused by family separations – as many moved away due to the lack of opportunities – and the gratitude they had for a group of students who visited and installed a solar-powered street lamp on a dangerous curve in the road. 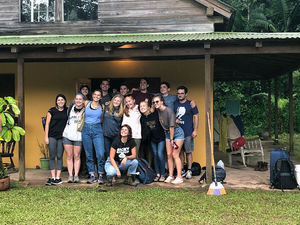 As the students head back to San Juan, they feel inspired and honored to be part of the Casa Pueblo familia

While in Adjuntas, the students slept in cabins at Finca Madre Isla for three nights. There was very little electricity or internet access. They bathed in a nearby mountain stream. The chirps of thousands of Coquís, tree frogs, and the night sky surrounded them. Some slept better than others, but all experienced life without reliable energy.

Upon returning to Notre Dame, the class is focused on doing what it can to support their fellow Americans in Puerto Rico. Students learned that U.S. congressional representatives hold more power over Puerto Rico’s energy future than those on the island. They understand that any first steps are not final steps, and that the energy future of Puerto Rico is very complicated with many variables and conflicting interests. “Learning about Casa Pueblo and the energy situation in Puerto Rico is one thing, but experiencing the zeal and hospitality of its people makes me believe that renewable energy for Puerto Rico isn’t just an idea - it’s a realistic goal that we can all work to achieve,” said undergradaute electrical engineer Daniel Mikovits.

Peter C. Burns, director of ND Energy, Henry Massman Professor of Civil & Environmental Engineering & Earth Sciences, and concurrent professor of chemistry and biochemistry, led this initiative with funding from ND Energy and an anonymous donor. There was no cost to the students. Ginger Sigmon, program manager for ND Energy, and Anne Berges Pillai, education and outreach associate program director, initiated and coordinated the coursework and travel.