Energy Independence for Puerto Rico: What You Can Do

We, the members of the Student Energy Board (SEB), encourage those interested in the future of Puerto Rico’s energy infrastructure to become informed about the current situation on the island. This page contains a summary of key points, as well as a sampling of articles and documentaries. Because the situation on the island changes almost daily, we recommend that you do some additional research on your own.

Why this is important to us:

Puerto Rico’s political status in relationship to the United States

Puerto Rico has been a US territory since 1898, gaining status as a commonwealth in 1948. Although they are American citizens, Puerto Ricans cannot vote in the presidential elections unless they are registered to vote in a state. There is one non-voting delegate in the House of Representatives. Money earned on the island is subject to Social Security and Medicare taxes, but not federal income tax. A long list of special rules and exemptions specific to the island has given Puerto Rico advantages and disadvantages over the years.

Puerto Rico has its own constitution, governor, and a bicameral legislature. However, in 2016, due to a financial crisis on the island, Congress passed the Puerto Rico Oversight, Management, and Economic Stability Act (PROMESA), creating an oversight board (FOMB) with the authority to override any part of the governor’s fiscal policies in favor of its own. This was in exchange for protection from over $70 billion worth of bond debt.

The balance of power between the elected and appointed officials is complicated beyond the purview of this page and is in a constant state of flux. The relevant point is that the US Congress currently controls much of what is happening in Puerto Rico in regards to reconstruction spending and will play a major role in the future of energy generation on the island.

Puerto Rico has relied almost completely on fossil fuels and thousands of miles of traditional transmission lines for its electricity needs. Due to financial problems, much of the grid was not well maintained before Hurricane Maria hit the island in May of 2017. It took over eleven months and $3 billion to restore basic services to pre-hurricane conditions. It is estimated that it would cost $26 billion to upgrade the neglected system. The lack of resiliency of the current centralized grid also poses major problems due to the frequency of hurricanes in the region.

The cost of residential electricity is nearly twice that on the mainland due to the need to import fuels. The Merchant Marine Act of 1920, or the Jones Act, requires that ships transporting cargo between the mainland and Puerto Rico be owned and managed by American citizens and have American crews. This antiquated law costs the Puerto Rican economy hundreds of millions of dollars per year, much of it in the energy sector.

In addition to imported fossil fuels being a drag on the economy, the inability of the current electrical grid to withstand major storms is an ongoing threat to public health. According to official death tolls, 64 people died during the hurricane due to drowning, collapsing buildings, or flying debris. Nearly 3,000 more died in the six months following the storm from a lack of electricity for ventilators, refrigeration of medications, and basic healthcare in isolated areas.

The Puerto Rico Electric Power Authority (PREPA) used to control the island’s electricity production and grid. Allegations of mismanagement plagued the authority as it ended up $9 billion in debt and became part of the PROMESA package. There have been ongoing conflicts between the FOMB, PREPA, and Governor Ricardo Rosselló about the future of energy production.

Options discussed include privatizing the entire system, establishing public-private partnerships, and building large liquid natural gas import terminals and power plants. Some proposals call for creating a natural gas hub for the rest of the Caribbean. Others are calling for the development of renewable energy produced at the sight of consumption, a resilient system built from the ground up with local control.

New technologies are allowing the world to undergo a shift from centralized to decentralized power operations. Microgrids and improving energy storage systems allow for resiliency and customization. Over 100 communities in the U.S. are moving toward 100% renewables, from Hawaii to Kodiak, Alaska and Georgetown, Texas. Why not Puerto Rico?

Next Steps for ND Energy 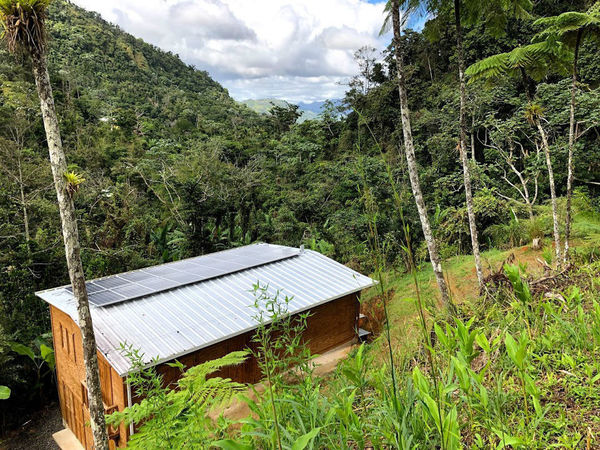 Although Hurricane Maria wiped out most of the energy grid in Puerto Rico in September 2017, there is literally a bright side in the aftermath of the disaster- the sun. Although there is still a push to continue investment in the traditional imported carbon fuels, private companies, non-profits, and educational institutions are moving forward to recreate the island’s infrastructure in a more resilient, practical way. Solar panels and microgrids are popping up everywhere. Communities are taking it upon themselves to explore independent co-ops for local energy generation.

In the hopes of riding this new wave of energy, a delegation from ND Energy traveled to Puerto Rico in January to explore opportunities for collaboration. One highlight of the trip was meeting with leadership and faculty at the University of Sagrado Corazón in San Juan. University President Gilberto J. Marxuach Torró was valedictorian of Notre Dame’s class of ‘88. This Catholic university of about 3,000 students was highlighted in Notre Dame Magazine for its community service immediately after the hurricane.

Another special event was visiting Casa Pueblo, in the central mountain town of Adjuntas. Executive Director Artuo Massol-Deyá spoke at Notre Dame about the history and goals of his organization during Energy Week this past fall. After meeting the staff and volunteers, touring the facilities, and observing the outdoor classroom in action, a list of objectives was compiled that would be beneficial to the Notre Dame community and the people of the area.

The New York Times recently declared Puerto Rico as the number one destination on its annual list of 52 Places to visit in 2019. So much has been done and there is so much left to do. ND Energy, through scholarship and service, hopes to be a force for good in Puerto Rico.