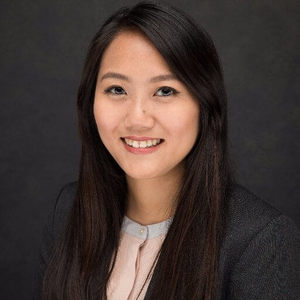 Last year, Bonita received a Patrick and Jana Eilers Graduate Student Fellowship for Energy Related Research from ND Energy for her work in experimental catalysis.  Her project centers around bimetallic catalysts for biomass conversion.  Biomass is a promising renewable energy source derived from plant or animal materials due to its carbon-rich content.

“People often look at biomass as a source for fuel, but they don’t realize that it is also a great source for specialty chemicals,” Bonita said.

In her presentation, Bonita examined furfural, an organic compound, which can be obtained from biomass. While not useful on its own, furfural can be upgraded into various solvents, polymers, fuels, and other useful chemicals. However, the traditional catalyst used for this transformation, copper chromite, is prone to deactivation, the loss of catalytic activity over time. Additionally, the disposal of the chromite catalyst is toxic to the environment.

“My goal is to find a new catalyst to replace the industrial catalyst they’re using right now,” Bonita said. She has looked at several bimetallic compounds, such as ruthenium molybdenum phosphide.

“What we’ve found is that the selectivity is comparable to the commercial catalyst with significantly less deactivation rate,” she said.

Within their research, the Hicks group does a great deal of materials characterization, much of which can be conducted with the vast capabilities and instrumentation available on campus.

“The XRD is the very first characterization that I do whenever I make a material,” Bonita said. “And then the XPS can look at the surface properties such as composition and oxidation state, which a lot of times is related to the catalysis itself.”

Bonita lauded the powerful combination of ND Energy’s Materials Characterization Facility (MCF), the Center for Environmental Science and Technology (CEST), and the Notre Dame Integrated Imaging Facility (NDIIF) as a great resource for their research group and others on campus.

Beyond research, Bonita is a member of the Society of Women Engineers (SWE) and STEMentorship through the Notre Dame chapter of the Association for Women in Science (AWIS), which has allowed her to connect with the next generation of women in STEM fields as a mentor for undergraduates.  Additionally, she has taken advantage of other outreach opportunities, including participating with ND Energy at Science Alive and the Expanding Your Horizons conference for middle school girls.