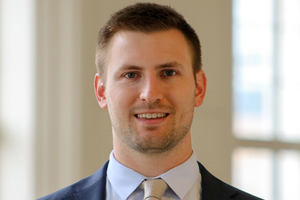 “Most people won’t see the direct impact, but the overall reduction of energy consumption in these industrial processes results in lower costs and reduced emissions,” Corrado said, noting that their polymers can go into a wide variety of applications.

“One of the most prevalent of these applications is the purification of natural gas as a cleaner energy source while we transition to renewable energy,” Corrado said in reference to Notre Dame’s involvement with the Center for Innovative and Strategic Transformation of Alkane Resources (CISTAR).

For his research project, Corrado works with iptycene-based polymers of intrinsic microporosity.

“Iptycene is a promising compound because it can incorporate some natural permanent free volume into polymers, which helps it overcome some of its greatest challenges, which is performance reduction over time,” Corrado said.

“There’s a lot of patience involved with doing synthesis,” Corrado said. “A lot of the polymers we work with are novel, and we synthesize them from the ground up.”

Corrado studied chemistry at Linfield College in Oregon and had intended to continue his education at Oregon State University. However, after visiting Notre Dame, he was drawn to the research opportunities and sense of community the University provides.

“I was excited by all the young faculty in our department that were working on all these interesting research projects,” Corrado said, adding that it was exciting to be among the first groups to move into McCourtney Hall.

Beyond his research, Corrado is the Vice President of the Chemical and Biomolecular Engineering Graduate Student Organization (CBEGSO), previously serving for two years as social chair. He also works as a part-time graduate fellowship consultant for the Office of Grants and Fellowships.

In Spring 2018, Corrado was among 12 Notre Dame students and alumni who received the National Science Foundation Graduate Research Fellowship award. Fellows benefit from a three-year annual stipend, opportunities for international research and professional development, and the freedom to conduct their own research at any accredited U.S. institution of graduate education they choose.