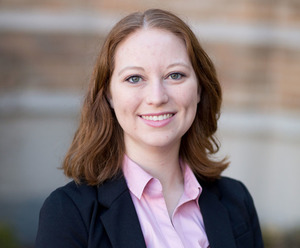 Rebecca Scheidt is entering her fourth year as a graduate student advised by Prof. Prashant Kamat in the Department of Chemistry and Biochemistry. She presented "Interfacial Charge Transfer between Excited CsPbBr3 Nanocrystals and TiO2: Charge Injection versus Photodegradation,” at the ND Energy PD&GS Luncheon in May.

In 2018, Scheidt received the Patrick and Jana Eilers Graduate Student Fellowship for Energy Related Research for her project looking at cesium lead bromide perovskite nanocrystals and how they operate in a photovoltaic device stack. Because these next-generation materials absorb light so well, these nanocrystal solar cells can be placed into thin film and flexible technologies.

“What I specifically look at is how they interacted with different charge transfer materials in the solar cell and whether that caused degradation under certain conditions,” Scheidt said. “In terms of making them more stable long-term, and looking at how they break down or degrade, we aim to make them more efficient overall.”

Scheidt is a frequent user of ND Energy’s Materials Characterization Facility (MCF). Using X-Ray Photoelectron Spectroscopy (XPS), she is able to see how the composition of these materials is changing as they degrade.

For her Eilers project, Scheidt worked directly with Elisabeth Kerns, a 2019 Energy Studies Minor graduate who was funded by the Vincent P. Slatt Fellowship for Undergraduate Research in Energy Systems and Processes.

As a Florida native, Scheidt recognizes the direct threat that climate change poses to her home state, and it drives her interest in her research.

“I’ve always been interested in conservation efforts and obviously climate change is a huge part,” Scheidt said. “Everything I love could be underwater in the next 50 years.”

Solar energy research, and the opportunity to work with Prof. Kamat, was a strong pull to bring Scheidt to Notre Dame.  She enjoys the unique multidisciplinary nature of the Kamat lab.

“We do a lot of chemistry work, but we’re also very involved with chemical engineering and even physics at some points,” she said.

Scheidt has been a standout associated researcher with ND Energy, earning a poster award at each of the first two ND Energy Research Symposiums. During Energy Week 2018, she gave a presentation on solar energy as a part of the Stinson-Remick Hall solar panel tours for students, faculty and staff.

Through her research experience, Scheidt has learned that sometimes a failed experiment is more important than a successful one.

“The quote I have above my desk is ‘a smooth sea never made for a skilled sailor,’” Scheidt said. “Science doesn’t always go your way. But you have to overcome that, and it really helps you learn the problem-solving ability.”